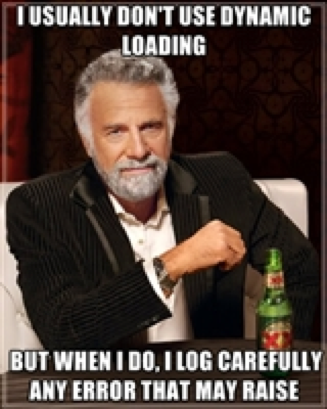 In the project I am working right now, we are reusing a Django project to develop two different products, productA and productB :-). These products frequently require the same service layer and the code can be directly reused, but in some scenarios different code is required.

Django project reusage gives us some advantages. Here I highlight some of them:

Our current solution to run different logic in both products, instead of using project configuration, is dynamic loading. To implement it, we have defined our own code structure respecting Django default structure:

If the Django application is running as projectA, the service logic being used is:

ProjectB has defined specific logic in both Django applications, and therefore no generic one is used.

Find underneath the snippet of code (simplified) we’re using to know which module must be loaded:

Pretty simple. I’m trying to load a module, and if it fails, I’m logging a warning. Sometimes the warning is the expected behavior (i.e. projectA does not define its own django_app_2 service logic), but it could also happen that an exception is raised while parsing a module code, and therefore the module cannot be imported (i.e. projectB django_app_2 service logic has a syntax error). Not logging this situation will hide possible undesired errors.

This is something that Django is not doing (at least in version 1.3.1) and caused me some paintful last Friday. This command:

WTF! I was getting crazy as I was pretty sure the django.contrib.staticfiles app was installed in the projectA settings file. After some debugging I came out with the problem: Django is using dynamic loading, I had a missing dependency in a model module, and the projectA settings wasn’t been loaded, therefore collectstatic was not a valid command.

To sum up, be careful while dynamic loading your code and log any possible error that may raise during the process. I do, you and Django should too. Otherwise, weird errors will happen because the root of the problem is being hidden.